Our video team – with my collaboration – decided to produce a dedicated video explaining the Apollo 11 mission by showcasing the important stages in 3D animations. The production not only tells the story of an epic adventure but also covers the maneuvers in detail.

For the print graphic I used the already produced stills of the video renderings. And to not replicate schematic infographics already seen elsewhere (i.e. by NZZaS), I respected the size relations of earth, moon and its distance on the double page. This conveys the often overlooked amount of time the astronauts spent totally exposed in space. 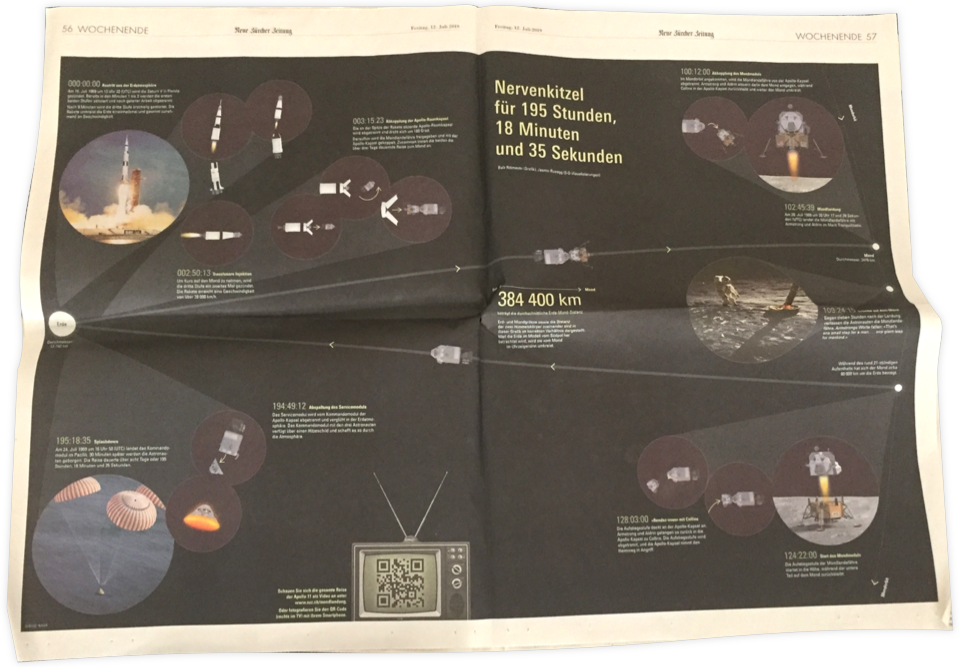 Here are some excerpts: 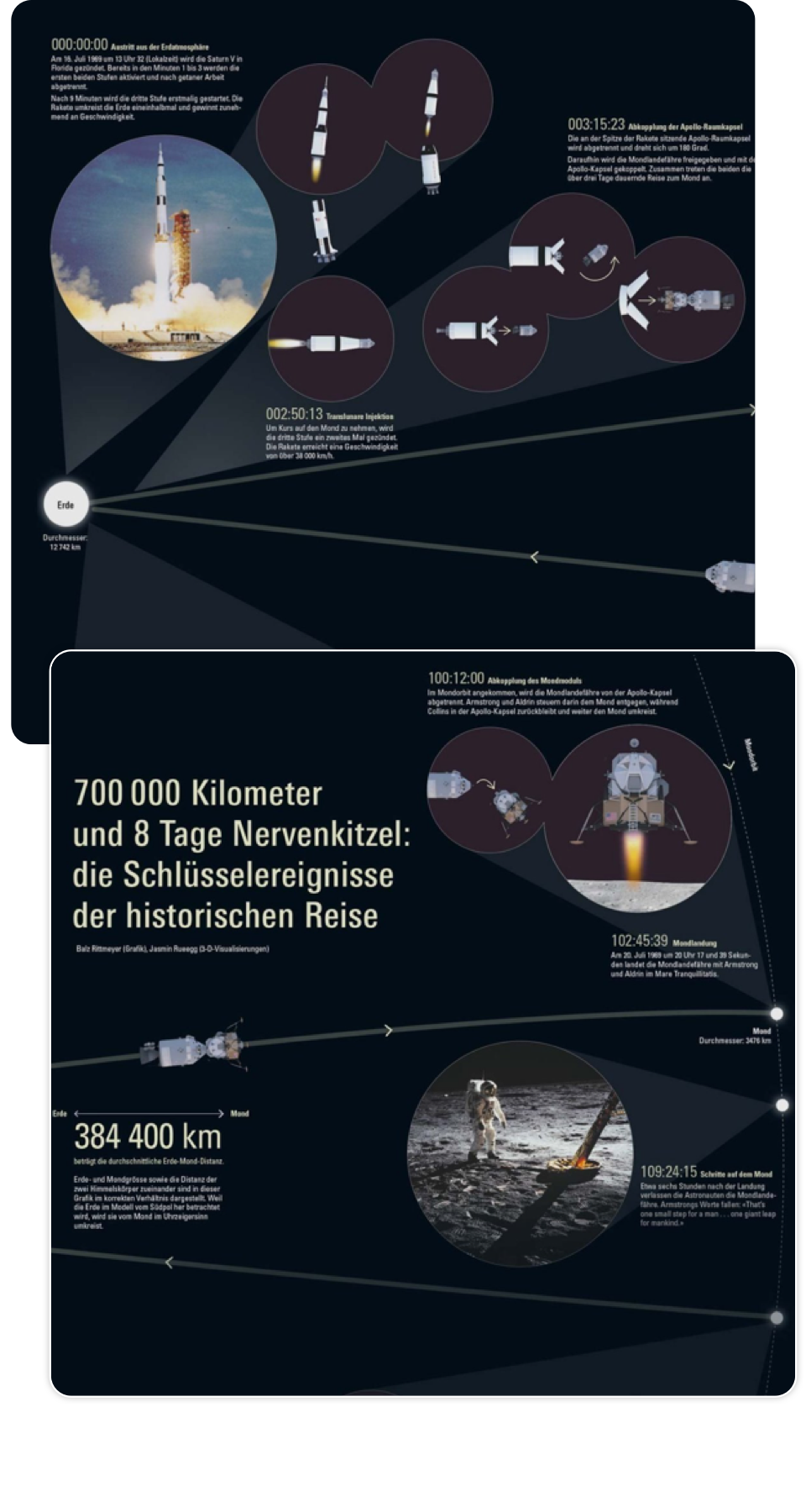 Because of our exact planned anniversary, we produced a real-time application which ran on the front page of nzz.ch during the nine mission days –replicating what happened exactly 50 years ago. On an earth-moon mini map a little rocket indicated in real time where the astronauts were at the time. Below we simulated a chat, based on original protocols, between the astronauts and Houston in a modern, app-style look – and of course time-synchronized with the mission’s course.

We also projected the application on the public displays positioned in the windows of NZZ buliding’s ground floor: While waiting for the tram it was possible to catch a dialogue of a real adventure happening far away – in distance and time. 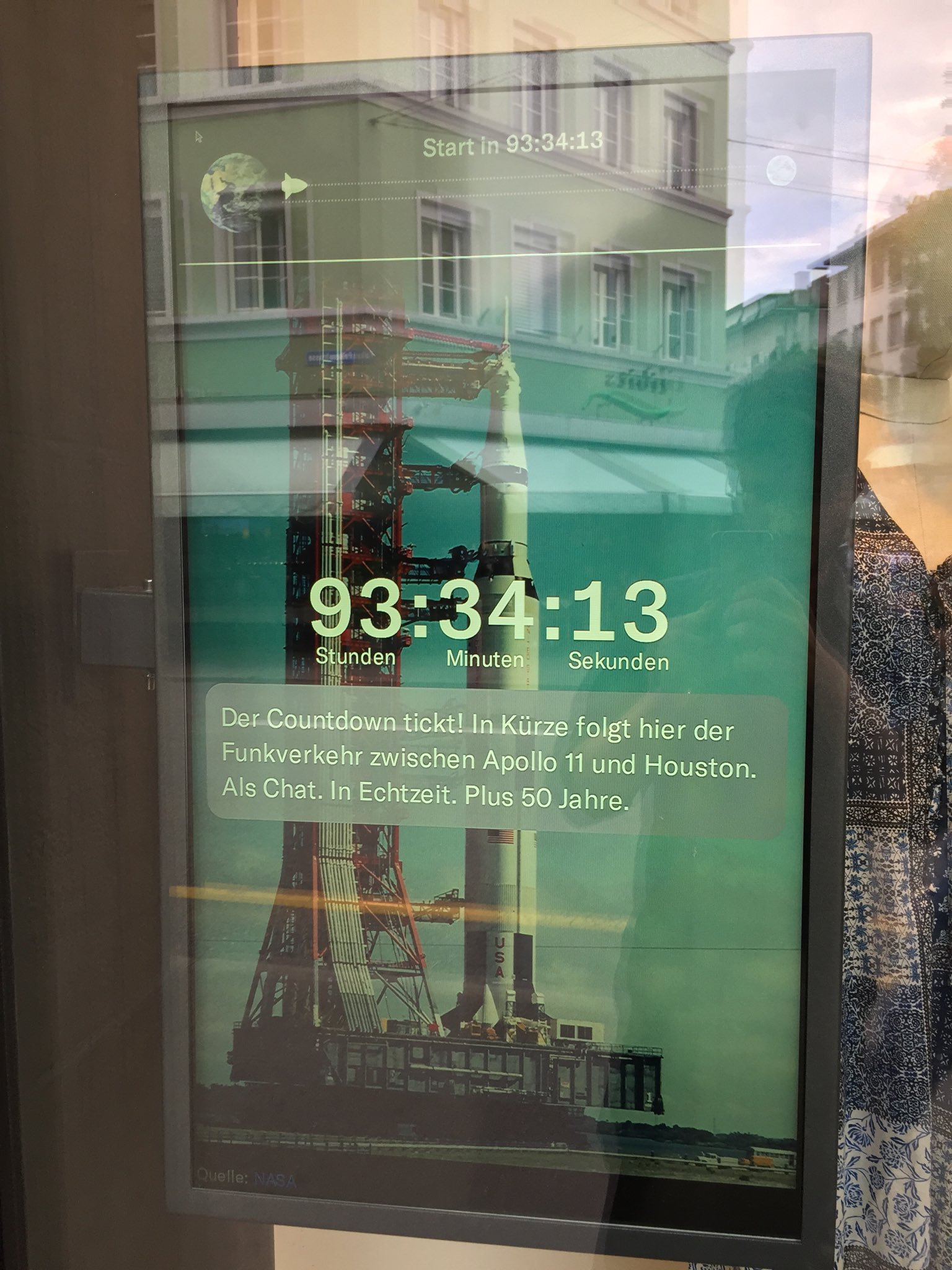 Since summer 2018 I was part of a delegation at NZZ that met regularly to discuss the moon landing publication. To contribute visual features, I first got aligned with the technical details of Saturn 5 and the Apollo 11 mission in general. A practice of mine was to store things I've learnt inside hand sketches: 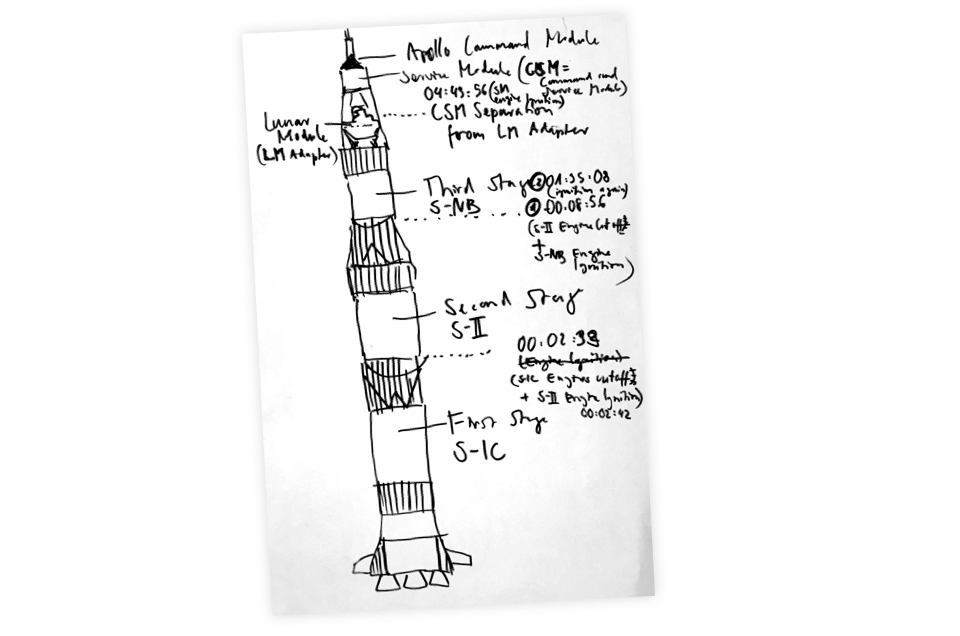 We generated plenty of ideas, one including a live WhatsApp chat group hosted by a virtual Neil Armstrong: If assigned to the group, the astronaut would send messages to you whenever something important happens during his journey (T-50 years) and attach pictures or videos – material that's all available, embedded in the astronaut historic chat protocol. Among others, I was pitching this idea to the delegation based on this concept sketch: 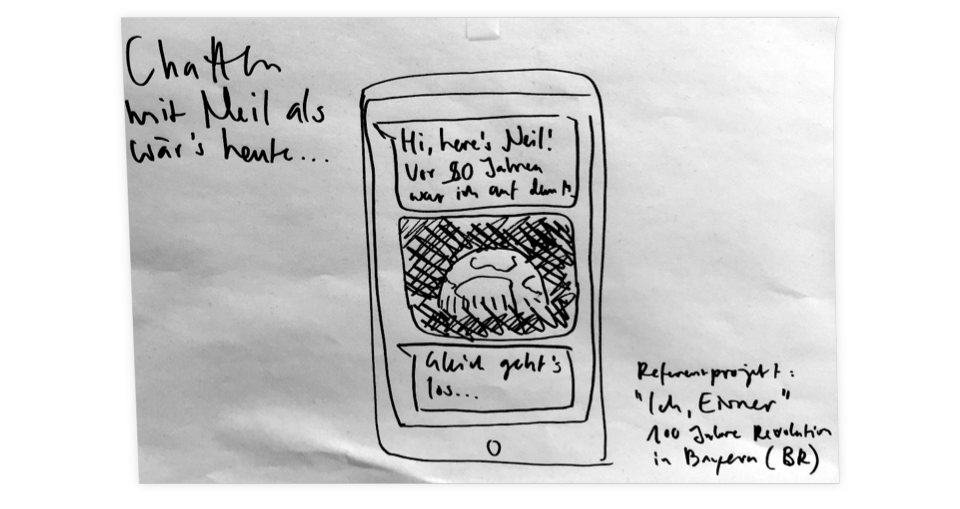 From early on, many of us were most attracted to the idea of re-experiencing the mission fifty years later in real time. The most favored approach was to show a virtual rocket on the website during the journey. This way frontpage visitors can observe its current state – and it would also conduct maneuvers including the moon landing itself. This kind of re-experienced moon landing was supposed to be shown on "new" channels too, like the public screens attached to NZZ' main building, and be an expression of the outstanding medial attraction the event had back in '69.

To get an idea of the complexity of the virtual journey, I sketched the maneuver events. Here's an excerpt: 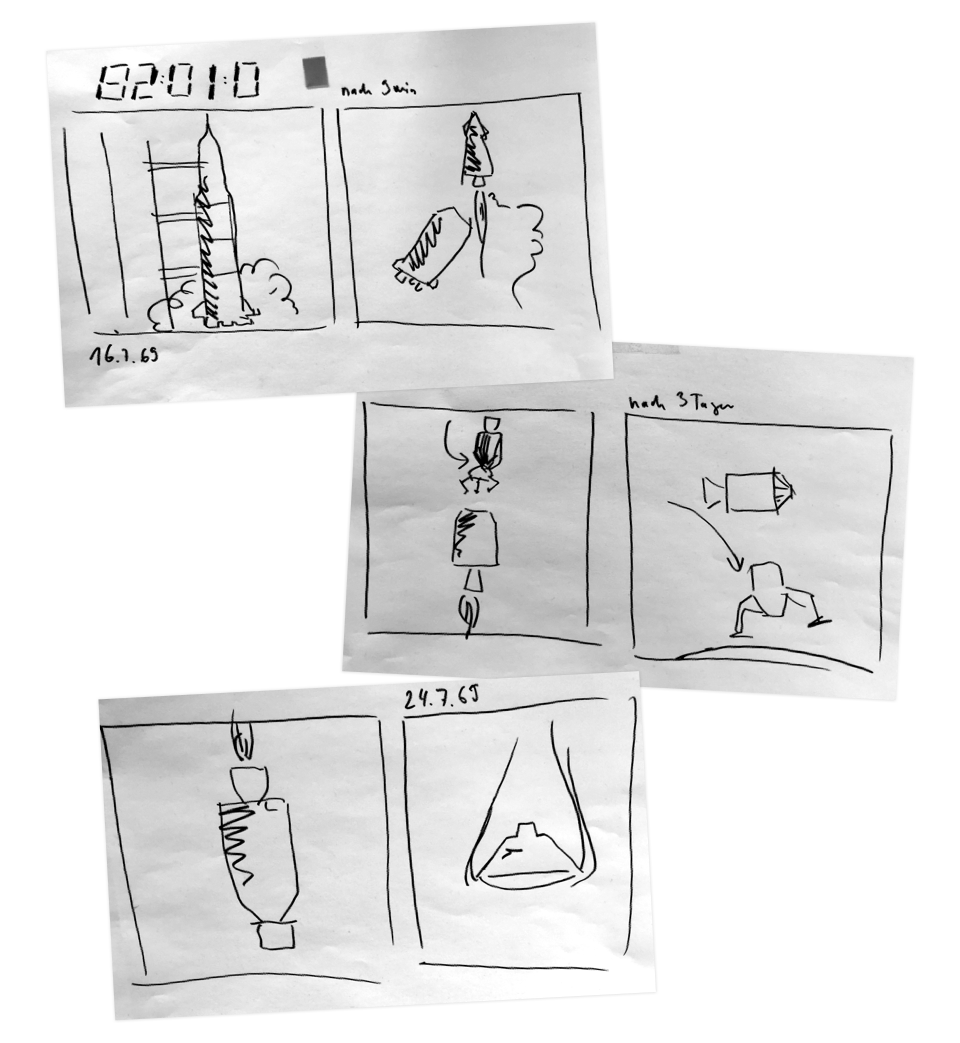 We soon realized that even simplified animations of the rocket wouldn't be worth the effort: Visualizing them in real time let only few people observe the animated maneuvers – and they're probably still the most expensive part in terms of spent resources. A replay feature surely could help out here but kills the idea of the live event. We therefore decided to reduce the planned rocket animations to a simple minimap while focussing more on the chat between the astronauts and Houston. From the beginning I was placing a small chat element next to the rocket – but now it got much more attention by filling out the whole screen.

Since the video team showed interest in covering the moon landing anniversary too, their 3D motion designer was able to provide animations in much better quality – and reach. By collaborating with them I could synchronize my Apollo 11 knowledge and use their resources to produce rendering stills of the maneuvers.

Besides the two productions for online, an infographic for the newspaper's print version was required to fill out a panorama page (two page spread). On the first issue of 2019, NZZ am Sonntag already produced a very detailed infographic describing the Apollo 11 journey. To not repeat the same kind of production, I wanted to reduce information density and instead express the real relations between earth and moon – with much space in between. Guided on a timeline, I highlighted the few important maneuvers, using the 3D rendered stills provided by the video team. This let me emphasize the astronaut’s 192 hour long exposition to an empty and unfriendly environment.

How Green is Your Spaghetti Bolognese?